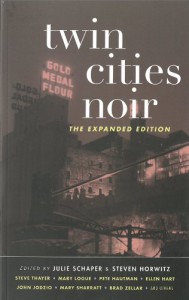 This will be the first entry in a new monthly segment of Reading Rainstorm in which I will review a book by or about a Minnesotan or a Minnesota topic.

My parents were always big mystery fans. Throughout my childhood, they read lots of thrillers, cozies, and crime procedurals and watched tons of British crime dramas on Masterpiece Mysteries on PBS. As a kid who was terrified of any sort of blood, even the BBC could be a bit too much at times, I never became a big fan of mysteries, perhaps due to their common reliance on murder. However, they also read a a few local authors and I came to realize that, for some reason, Minnesota is home to a rather large population of mystery authors at the same time that started to be interested in mystery themes. Could it be a similar phenomena to the Nordic mysteries that have lately become popular? There does seem to be a certain overlap. What is it about dark northern climes that encourage dark, moody tales?

The work of a few of these authors is collected in this anthology of noir short stories, part of the Akashic Noir series that explore the dark side of various world cities. I read it first back in 2007, soon after its publication, intrigued by a collection that drew upon the quirkiness and dark under belly of the Twin Cities. The much debated subgenre of "noir," with its cinematic roots, is an apt palette to explore the "hardboiled," strange, and just plain quirky vibe of the Twin Cities.

Like most anthologies, the stories themselves were a bit of a mixed bag but I recall enjoying the collection. While the stories varied in their depiction of Minneapolis and St. Paul (some used the city as mere backdrop, while others drew in local color), they were diverse and varied in their topics; from pure mysteries, to relationships gone wrong, to dark humor. There were a few period pieces, set in the 1890s and 1930s, a few police procedurals/crime capers, and even one that goes as far afield as Duluth. Though there is still plenty of mayhem, nefarious, though ill-thought-out plans, and untimely deaths, not every story deals with murder. The collection was generally an evocative and satisfying read.

However, recently I noticed this new expanded edition of Twin Cities Noir and decided to revisit it and the three new stories included in the collection turned out to be three of my favorite in the collection. I think I might enjoy the "noir" genre more than most mystery, exploring theme, atmosphere and characterization as much as just a rote "who-dun-it" plot, and the additions of John Jodzio, Peter Schilling Jr., and especially the short comic of Tom Kaczynski, really illustrate this.

Each of these stories expand the theme, juxtaposing human pathologies like greed with the weirdness and the darkness of everyday life. Kaczynski's almost mystical depiction of the Minneapolis skyway defies genre. These stories join other worthy tales in the collection, including very popular writers William Kent Krueger, Ellen Hart, Pete Hautman, and Steve Thayer. I'd recommend this as a fun, quick, gritty read that explores the breadth of the flexible noir style and the idiosyncrasies of Minnesota.